As always, Microsoft does not disclose a lot about the updates in the release:

One day, I am going to create a petition to ask Microsoft to give more details about what a particular update does. It will help us determining if we want the update or not... 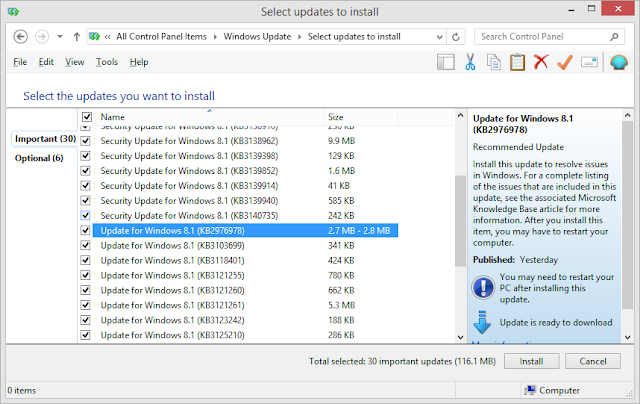 Interestingly, this update is often the first to get installed, but let's not be paranoid, this is certainly because it has the lowest number.

When we read what is written about it and we look at the files it updates, we can deduct that KB2952664 updates the components that run alongside GWX to determine if the system that runs them is compatible with Windows 10. (GWX is the name for "Get Windows 10" set of components,..)

Then should it really be a problem to install this update? Well, if you decided not to upgrade to Windows 10 now (or maybe never), this update is useless and will use resources for absolutely nothing. Furthermore, some of the components embedded in KB2952664 are "telemetry" components, meaning that they will analyze your system and send data and "unknown details" to Microsoft and its partners.

Users who are concerned about their privacy and who want to keep having more choice over what gets installed on their computers surely don't want this new KB2952664.

Fortunately, you just have to run win10wiwi (free on http://win10wiwi.com) to make it sure that this update does not get installed and won't be proposed to you again.

Now wait, what other updates are in this batch that could have some impact on privacy and the way Windows 7 and Windows 8.1 are potentially updated to get upgraded to Windows 10?

This update fixes the following issue with previous versions of the Windows Update Agent for Windows 8.1, Windows RT 8.1, and Windows Server 2012 R2:
Windows Update would sometimes not restart the computer as expected when the “Always automatically restart at the scheduled time” policy was set.

Actually, once again, two sister-updates, aimed at updating Windows Update client.
So should you apply these updates?

The answer is most likely yes, since they are apparently bug corrections.

By the way, some of the previous updates to "Windows Update" client that were said to be useful when upgrading to a newer operating system have certainly embedded bug corrections as well.

It is hard to decide then if one should install such updates, but fortunately, this new release of Windows Update client certainly comes with all the bug fixes previously released.
Does it mean it also has the "enhancements" that were said to be useful to upgrade to a newer version of the operating system? The answer is most likely yes. But when you patched your system with Win10wiwi, these "enhancements" are supposed not to have any effect, since you will never go the "Upgrade to Windows 10" way and then all the code related to said upgrading should not be run.